The Board publicly posts monthly budget reports regarding both the one-time investment costs and operational costs on its website (surreypoliceboard.ca). These budget reports are presented publicly by the Board’s Finance Committee during monthly Board meetings.

The one-time investment budget shows a breakdown of costs related to legal, human resource, infrastructure and information technology domains, among others. In addition, the SPS operating budget breaks down salaries and benefits and other expenditures by Bureau. The reported costs in these two budgets include any services provided by the City of Surrey to SPS, as well as the salaries of any City employees who have been temporarily seconded to SPS.

“The Board has an obligation to residents and businesses in Surrey to ensure spending related to the police is transparent,” says Melissa Granum, Surrey Police Board Executive Director. “The Board regularly reports publicly on all expenditures against City Council approved budgets as the SPS builds a new, local policing service for Surrey residents.”

The 2022 policing budget will undergo public consultation with the overall City of Surrey budget in the coming weeks. At such time as the 2022 policing budget is approved by City Council, the Board will begin reporting publicly on expenditures related to that budget and will continue to report publicly on the one-time investment budget for the life of the transition. 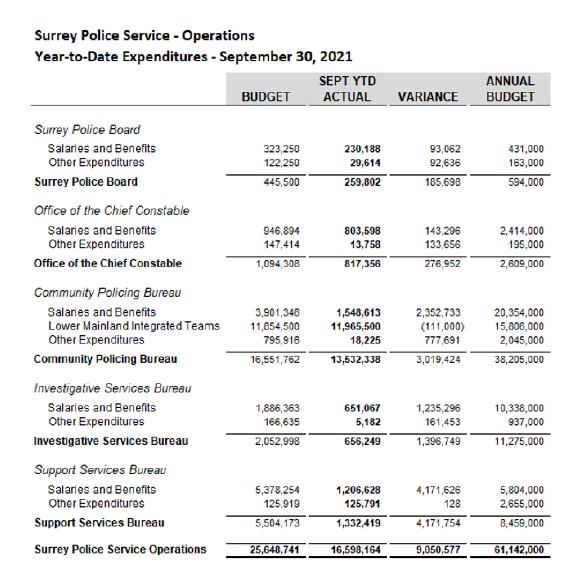