Accomplished and Approachable; Inspirational and Innovative – These are words that have been used by top police leaders across this Province when speaking to the skill set, depth of experience achievements and dynamic personality of Deputy Chief Constable Jennifer Hyland.

Her policing career spans over 20 years having worked in both municipal police and RCMP environments. Jennifer is highly regarded by the community she has proudly served, the officers and staff under her command, colleagues and chiefs of police across this province. 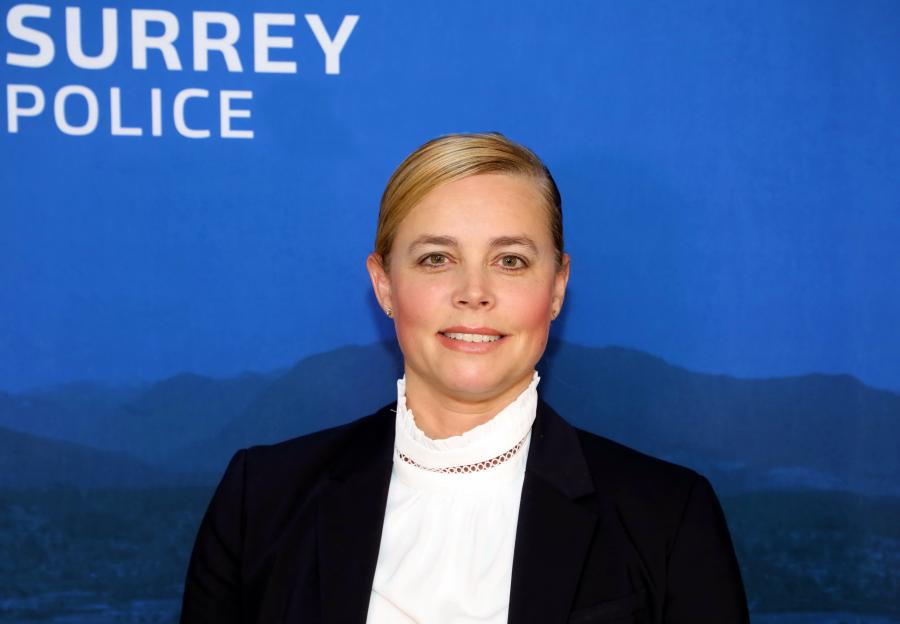 Community consultation and collaboration are well demonstrated actions of Deputy Chief Hyland’s leadership philosophy and approach. She is known as one who “walks the talk” of community policing, strategic planning and human resources management.

She is relational by nature and a people centered leader by design having the capacity to inspire individuals and groups to achieve common goals. She is committed to the development of people to ensure strength and diversity in the future.

Having many achievements to her credit and having moved through the ranks, she has never forgotten her “why” that brought her to the policing profession.

I entered policing to be an advocate and defend those who are most vulnerable in our community who need our support the most. – Deputy Chief Jennifer Hyland

Chief Constable Lipinski states, "I am proud to announce the appointment of Jennifer Hyland to the Surrey Police Service as its newest Deputy Chief Constable. To say she is highly regarded is an understatement and I am looking forward to working together to build an exemplary police organization. The community will be well served having Jennifer Hyland as a member of the Surrey Police Service Executive Team. I am committed to bringing the best of policing to serve the citizens of Surrey.”

Jennifer Hyland graduated from Simon Fraser University in 1994 with a B.A. in Political Science. She began her policing career in 1998 when she joined the New Westminster Police Department and attended the Justice Institute of British Columbia for her law enforcement training.

Jennifer spent her time with New Westminster Police working as a uniformed frontline officer. Early in her career she recognized and regarded "outside the box" thinking and sought to do police work in the best manner possible.

During her tenure with New Westminster Police she developed a DNA Registry for Sex Trade Workers. As a result of this work, she, and a partner colleague, were awarded a recognition plaque from the Problem Oriented Policing Conference held in San Diego California in 2000.

Jennifer transferred to the RCMP in 2001 where she was posted to Surrey Detachment. She worked in both frontline and plainclothes units and, in January 2006, she was promoted to Corporal working in the Serious Crimes Section at the Ridge Meadows RCMP detachment. In 2010 she was again promoted, to Sergeant, and was head of the Serious Crimes Section.

After a short transition to work in Professional Standards in 2013, she advanced to the role of Commissioned Officer and became the Inspector Operations Officer for the City of North Vancouver RCMP Detachment.

In 2019, as a result of her guidance in social media communications and public relations, her detachment was awarded the RCMP's inaugural National "Innovation in Crime Reduction Award."

In 2020, Jennifer was awarded the International Association of Women Police “Mentoring Award” for a leadership program she created and implemented at her detachment.

Jennifer’s personal philosophy is "It’s the pursuit of excellence that counts" and her overall policing and leadership ethos is one of inspiring and guiding those around her in the successful achievement of accomplishing their personal best.

Years working on child abuse and sexual offense investigations taught Jennifer the essential and far-reaching value of patience and compassion in policing.

While she was always known as a tenacious investigator, she has never lost sight of the human cost and personal expenditure, not just in the police officer, but also of the victims, the families and the communities in which they serve.

On a personal note, when not working Deputy Chief Hyland can be found spending time with her family and new puppy. She enjoys family activities that include skiing and snowboarding in the winter and water sports in the summer.