The latest Deputy Chief Constable to be hired by the Surrey Police Service is Mike LeSage who brings exemplary service, expertise, and leadership in operational and cultural diversity policing.

Surrey, BC – Surrey Police Service announces the appointment of the second of three Deputy Chief Constables. 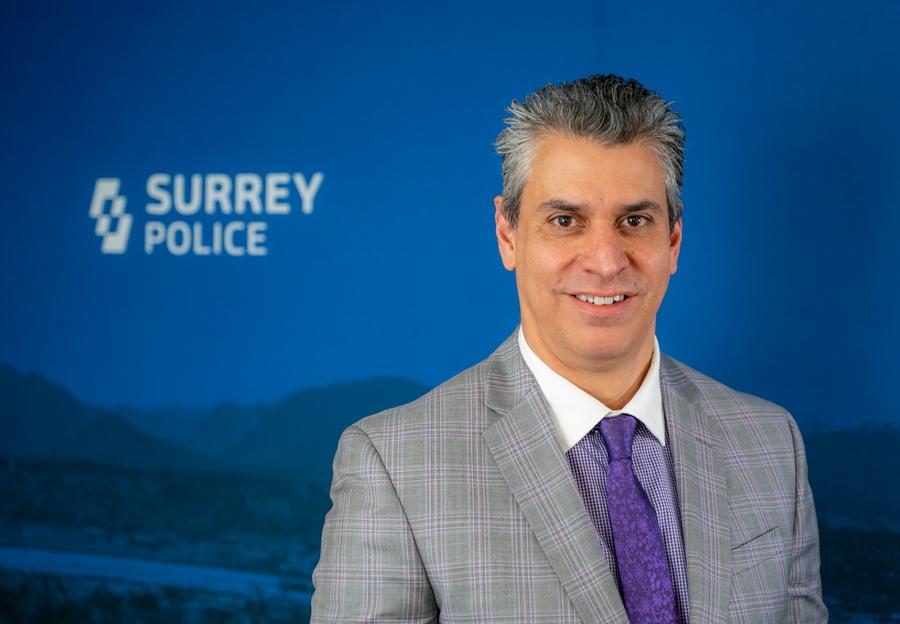 Deputy Chief Mike LeSage brings over 24 years of policing service that is local, national, and international in scope. He has worked in a variety of divisions across the nation from large urban centers to small, isolated fly-in communities. He has a passion for community policing and all that can be accomplished when we work together with the citizens we serve.

He has served with the RCMP for his entire career and has been promoted through the ranks and at present is the Assistant Commissioner, Chief Officer for the Combined Forces Special Enforcement Unit (CFSEU) of British Columbia.

Deputy LeSage states, “It is a rare opportunity to be apart of creating a police agency from the ground up, so I am looking forward to working with the Executive Management Team and the community to build an exemplary community-centered Surrey Police Service.”

Deputy Chief LeSage will be the officer in charge of the Community Policing Bureau of the Surrey Police Service. This will encompass the uniformed frontline, community engagement, crime prevention and intervention initiatives all of which are critically important to enhance the safety of our citizens.

“It is a rare opportunity to be apart of creating a police agency from the ground up.” – Deputy Chief LeSage

“I am pleased to announce the appointment of Mike LeSage to the Surrey Police Service as its newest Deputy Chief Constable. Our organization, and by extension the citizens of Surrey, are most fortunate to have the impressive depth of talent, capability, competence and experience that Mike LeSage brings. He is strong in character and culturally sensitive as one who celebrates and represents his cultural roots. I continue to focus my efforts on bringing the best of policing to serve the citizens of Surrey,” states Chief Constable Lipinski.

With the Executive Team nearing completion, Surrey Police Service is now focusing on the next layer of leadership and seeking to hire for the Superintendent rank over the course of the coming weeks. Posting for these positions can be found at surreypolice.ca/careers.

Assistant Commissioner Michael LeSage assumed the role of Chief Officer with Combined Forces Special Enforcement Unit BC in February 2020. He is responsible for the full range of the Unit’s operations throughout the province. CFSEU-BC’s mandate is to target, investigate, prosecute, disrupt, and dismantle organized crime groups and individuals that pose the highest risk to public safety.

Michael was born and raised in Sault Ste. Marie, Ontario, and is a member of Garden River First Nation. He began his career with the RCMP in 1996 and spent five years in Williams Lake, BC, working in General Duty and First Nations policing. Michael subsequently moved to the Northwest Territories in 2001 where he worked in the Fort Smith Detachment, then in several positions in Yellowknife with Major Crimes and Drug Section, as the Mackenzie Gas Pipeline Coordinator, and finally with Drug and Organized Crime Awareness Service.

In 2008, Michael transferred to the Extra-Territorial Response Unit of the National Security Criminal Operations Branch in Ottawa. There he was the team commander on many significant terrorism investigations abroad and used his subject matter expertise on legal applications to train RCMP and other national and international police members. Michael went on to assume the role of Officer in Charge (OIC) of the Integrated National Security Enforcement Team where he was responsible for all the national security criminal investigations within the National Capital Region. In 2011 he transferred to National Headquarters (NHQ) as the OIC of National Aboriginal Policing and in 2012, assumed the role of Acting Director General of National Aboriginal Policing and National Crime Prevention Services.

In 2013, Michael moved to Saskatoon, Saskatchewan, and took on the position of OIC of Integrated Organized Crime North. He was responsible for all organized crime and economic integrity investigations for northern Saskatchewan. A year later, in 2014, he returned to the Northwest Territories (G Division) as the OIC of Criminal Operations, where he was responsible for all policing operations in the NWT across 23 detachments serving 33 communities. He also served as Acting Commanding Officer of RCMP G Division.

In January 2017, Michael assumed the role of “O” Division (Ontario) Criminal Operations Officer where he was responsible for 1800 members in several offices and detachments throughout the province. During his tenure, he oversaw the largest deployment related to a national security investigation in the history of the RCMP.

Michael holds a Certificate in Public Sector Leadership and Governance from the University of Ottawa and is an alumnus of the International Leadership in Counter Terrorism Program (LinCT). He received the Queen’s Golden Jubilee Award for his leadership in National Security in 2012, and in 2019 was the recipient of the Public Service Award from the Transformation Institute. Outside of work, Michael enjoys spending time with his wife and four children.