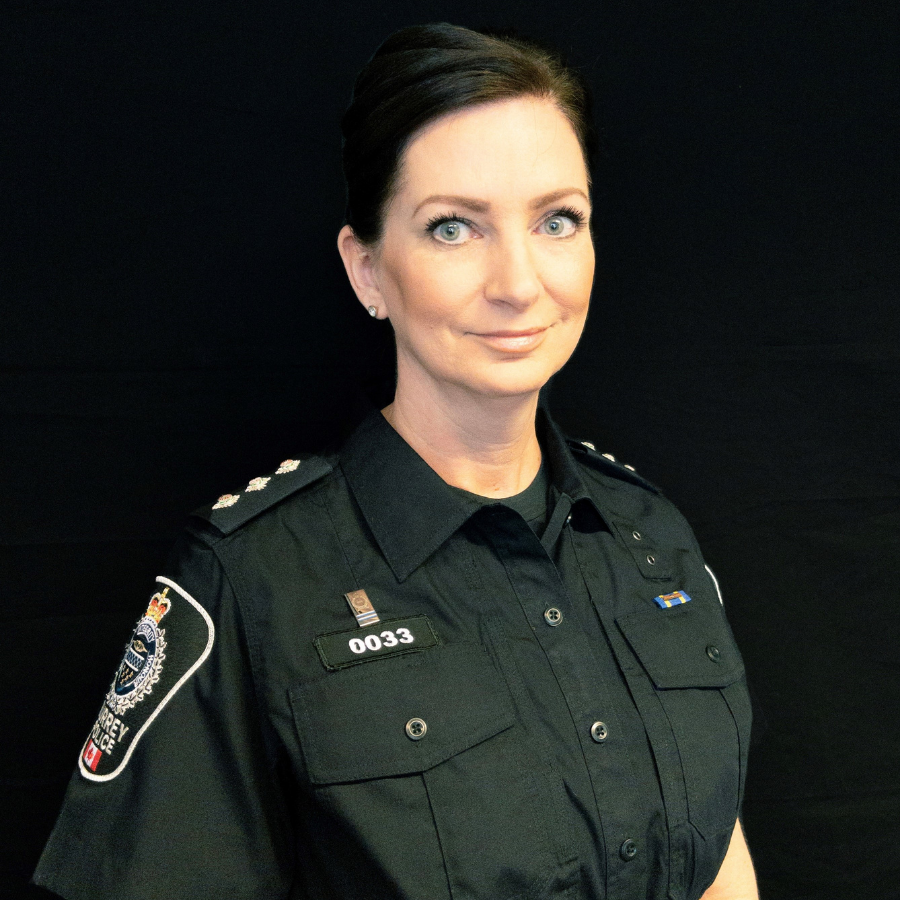 Inspector Milne brings 26 years of Frontline policing experience to SPS and with it, a strong commitment to helping SPS recruit the right people for the job. “It’s important to recognize that not everyone is suited to a career in policing,” she explains. “With the robust recruitment process that we’ve developed at SPS, we’re taking multiple steps to ensure that we attract recruits who are well-suited to this profession, with a high level of emotional intelligence and the necessary resilience to enjoy a healthy and successful career.”

Insp. Milne’s heart has always been with the Frontline officers, who are the backbone of policing. One of her primary reasons for joining SPS was the vision of the Leadership Team when it came to employee wellness. “Over the course of my career, I’ve seen – and personally experienced – what the demands of the job can do to officers if they aren’t properly supported. SPS continuously demonstrates that we are making health and wellness a priority right from the start – we’re 100% committed to looking after our employees.”

In addition to her Recruiting and Frontline policing roles, Insp. Milne is a member of SPS’s Women in Leadership Committee, which is working to ensure SPS is truly gender-inclusive – from the functionality and fit of female officers’ uniforms, to benefits that support employees who want to have families while pursuing a career, to scheduling, policy development, and promotional processes. “To be as inclusive as we possibly can, we have to re-think traditional policing environments,” says Insp. Milne, “we strive to eliminate barriers and systemic bias.” 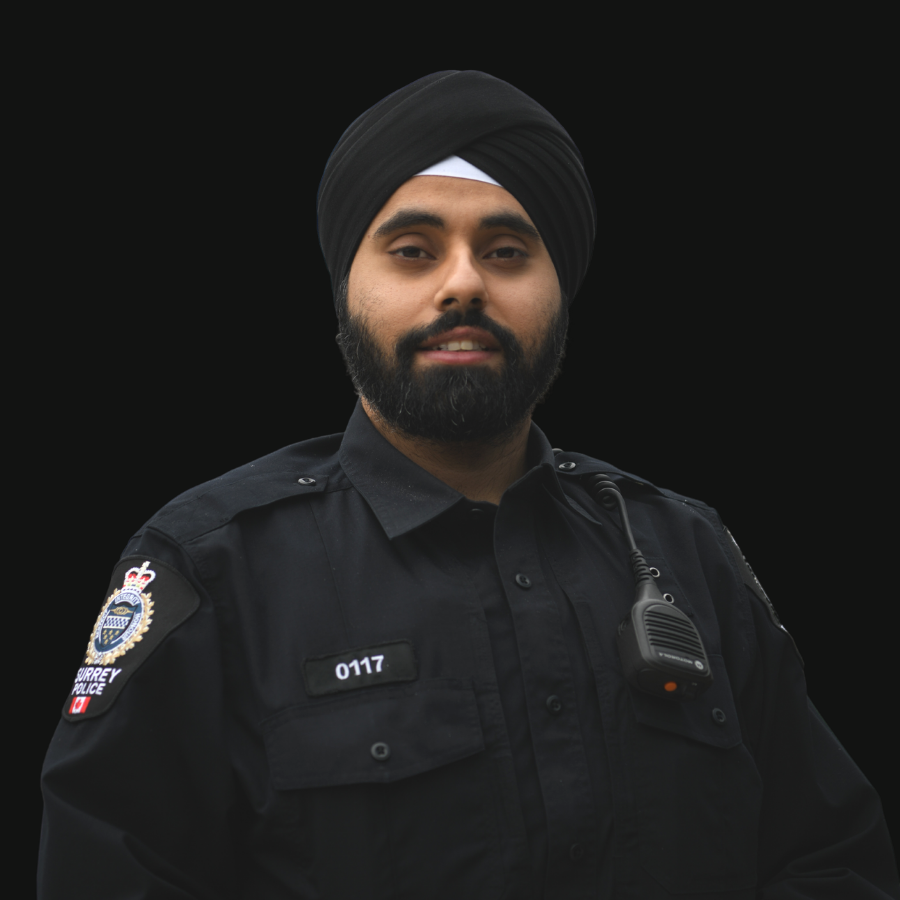 Cst. Nagi was among the first group of 50 experienced officers deployed in Surrey. He comes to SPS with 4 years of experience in Patrol and Crime Prevention, and a background in the military and corrections Service.

He joined SPS for his career, but also to help support his community.

“As a person who is helping to support his aging parents, I wanted to join an agency where I could build a rewarding and stable career without having to move and leave family behind. And, as a practicing Sikh, I believe deeply in serving the community. Community policing is all about getting involved and being proactive: getting out on the streets, talking to people, and building the relationships that create trust.”

Since coming to SPS, Cst. Nagi has been impressed by the positive internal culture.

“There’s a lot of support – a lot of smiles on peoples’ faces. Everyone is bringing the best practices from their previous agencies and looking for ways to build something new and modern.”

As a first-generation immigrant, Cst. Nagi has an insider’s view of what it is to be torn between traditional and Western cultures – and how gangs often recruit from within that gap.

“Based on my own experiences, I feel like I can talk to kids on their level and, as my career develops, I’m hoping to work in sections dealing with youth and gang prevention. If, over the course of my career, I can help one child get onto the right path, I’ll have accomplished what I set out to do.” 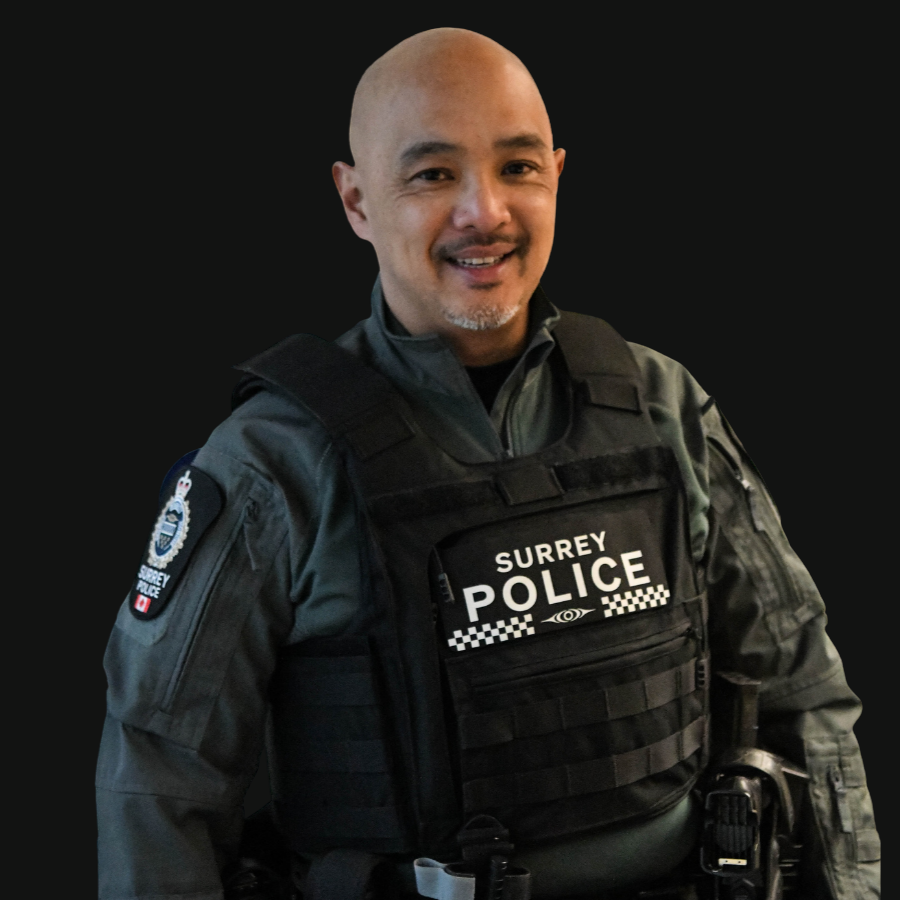 Cst. Cortes is an instructor in our Training department who brings 27 years of experience in Patrol, Traffic and Training to SPS. His time at two different law enforcement agencies has given him an informed view of what officers on-the-ground need, and he’s excited to establish an Operational Training department from scratch with a like-minded and experienced team. “We all come from other agencies,” he says, “and we know what works, what doesn’t, and what can be improved. We’re integrating all of the different training philosophies and ideas – looking at how to build skills and confidence – and implementing the practices that will work best for Surrey.”

Cst. Cortes speaks with enthusiasm about some of the progressive policing programs, such as Integrating Communications, Assessment, and Tactics (ICAT), that the group is teaching.

“ICAT emphasizes the use of calm communication and dialogue in dealing with a subject, so that you can de-escalate a situation where it’s safe to do so. We’re also working with other agencies within the City of Surrey in ways that haven’t been done before.”

Since joining in July 2021, Cst. Cortes has watched SPS grow. “I joined because it was an opportunity to be part of something historic, and to train the next generation of police officers in modern and progressive policing practices. We’re literally building the training department from the ground up – we’ve gone from having no equipment, to being the first agency in BC to have a modular training centre with moveable walls. It allows us to configure different scenarios for our officers as they move through a range of home and building environments.”