In 2018, the City of Surrey decided to change how it wants policing services to be delivered and exercised its authority under the BC Police Act to have its own municipal police service. The Province of BC approved this change and appointed a police board in 2020. Policing services in Surrey are now transitioning from the RCMP to the Surrey Police Service (SPS), which was created as an independent police service by the Surrey Police Board in 2020.

At this time, SPS is not the police of jurisdiction for Surrey; policing services will continue to be provided by the RCMP until SPS assumes responsibility for policing.

Changing a city’s policing model is a big deal. Public safety is something that residents care deeply about, and a change of this magnitude can be unsettling for some. It is understandable that people will have differing opinions about Surrey’s move to a municipal police service. However, it is important to know that SPS is approved to move forward. Below are some of the key facts to know about Surrey’s policing transition.

The move to a local police service that answers directly to its citizens is an investment into the future of Surrey. Here are some of the benefits that Surrey residents and business owners will realize through this investment:

The federal, provincial and municipal governments established the Surrey Policing Transition Trilateral Committee (SPTTC) in 2020. The SPTTC is tasked with guiding and supporting the development, negotiation and implementation of a phased transition of policing services in Surrey.

The SPTTC is made up of senior representatives from the three levels of government: Assistant Deputy Ministers from the Government of Canada and the Province of BC, and the City Manager and General Manager, Policing Transition, from the City of Surrey. Senior leaders of the RCMP and SPS also participate in an “ex officio” capacity. The SPTTC holds the authority to determine how the integrated transition is happening.

The SPTTC is supported by a Working Group and obtains subject matter expertise to plan and implement transition activities. There are dozens of experts with in-depth, Surrey-specific knowledge and experience of policing who are working collaboratively to enable the transition.

A critical path has been developed by the SPTTC, which details the work to be done throughout the policing transition. The transition partners have been collaborating since 2020 to bring together detailed work plans to implement this transition.

The SPTTC partners have agreed to a phased, integrated transition process, with the deployment of the first group of 50 SPS commencing on, or before, November 30, 2021.  These officers will be assigned to positions within the RCMP Municipal Police Unit in Surrey (i.e. Surrey RCMP). The RCMP will remain the police agency of jurisdiction during this point of the policing transition.

The deployments of each group will be staggered to allow for a seamless and safe integration for the RCMP, SPS and the public. These experienced SPS officers have been fully trained by SPS, security cleared to municipal police standards with full access to required police systems, and provided the necessary uniforms and equipment. The November 2021 deployment marks the official beginning of Surrey’s policing transition. There will be many more deployments throughout 2022 and 2023 and as the  transition progresses.

The RCMP and SPS are building a collaborative human resources strategy to ensure the coordination and deployment of SPS officers alongside Surrey RCMP officers. As additional details are confirmed, more information will be shared for public awareness.

Updates on SPS’s operational budget and the one-time policing transition budget are released regularly by the Surrey Police Board and can be found on the Board’s website. The reported costs include any services provided by the City of Surrey to SPS, as well as the salaries of any City employees who have been temporarily seconded to SPS.

The cost of the infrastructure of the transition will be approximately $64M, phased over five years. This will cover start-up expenses, including equipment and information technology infrastructure. The cost of running SPS on an annual basis is currently projected at $206M by 2025 and is within the City’s approved five-year financial plans. Approximately 80-90% of police costs relate to salaries, given the 24/7 operational requirements.

The City currently pays 90% of the cost for assets, including vehicles and equipment acquired by RCMP, for policing in Surrey. Under the terms of the Municipal Police Unit Agreement, the City can have those assets transferred from the Government of Canada to the City as part of the policing transition. This process is underway through the SPTTC. SPS officers will receive new uniforms, including upgrades to body armour.

The City owns or leases all facilities used by the Surrey RCMP and SPS. SPS will operate out of existing facilities during and after the transition.

The City currently pays for training of RCMP members (at RCMP Depot in Regina) through the RCMP contract budget. Future SPS recruits will pay the costs of their training at Justice Institute of BC, but they will receive a salary while they attend training.

The unionization of the RCMP and its new collective agreement will increase costs for all RCMP-policed municipalities, closing the gap in operating costs between the RCMP and municipal police.

The SPS is an investment in the future of our rapidly developing city. Public safety is an area where you want the best service, not the least expensive. 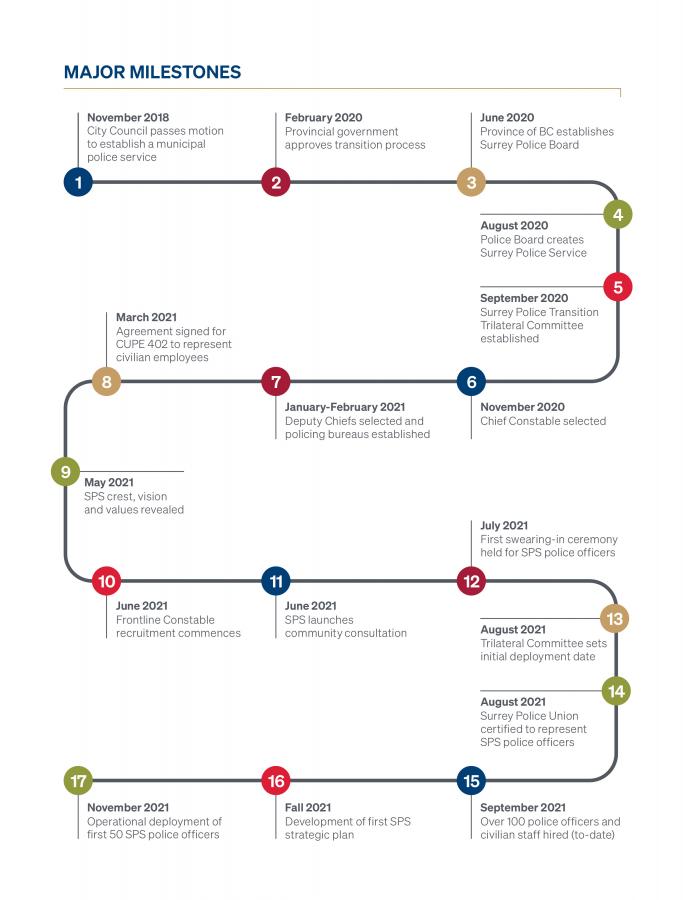