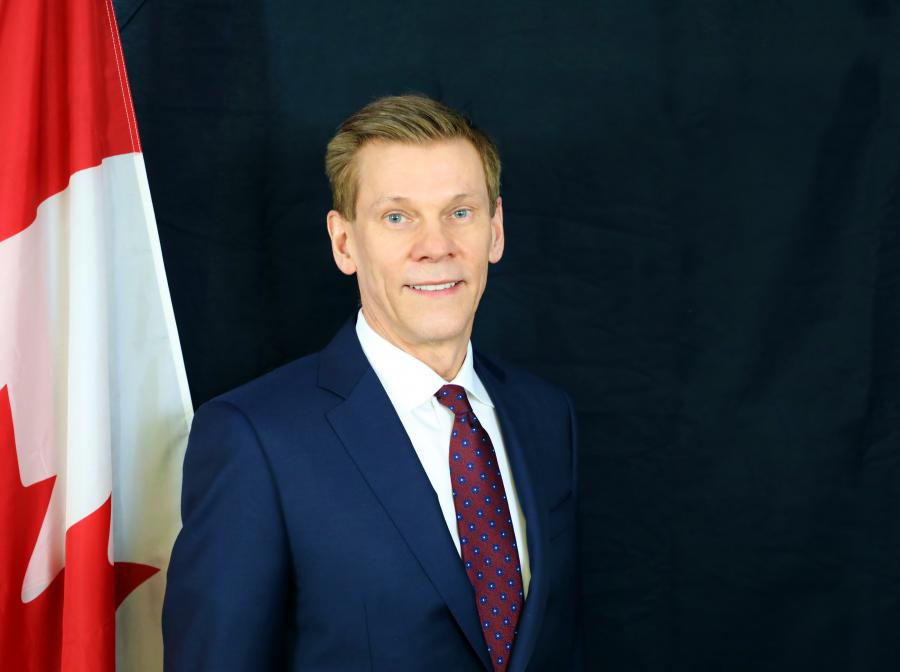 It is an exciting time at Surrey Police Service (SPS) as we are just six weeks away from our first operational deployment. By November 30th, 50 experienced SPS officers will be assigned to duties within the RCMP Municipal Police Unit in Surrey (Surrey RCMP). This is the first step in the phased, integrated transition process that is being managed by the Surrey Policing Transition Trilateral Committee, which is made up of representatives from the three levels of government.

Our Training and Leadership team has been busy helping to prepare these 50 officers for their deployment. This week our second class of experienced officers began their training, while the first class gets ready to graduate. We have involved a number of local community agencies in our training so our officers learn, first-hand, about the community services, groups, Indigenous communities, and local issues for the city they will soon serve.

SPS continues to grow every week. On Monday, we held our third swearing-in ceremony to welcome 42 new employees, bringing our staff total to 154 (138 sworn officers; 16 civilian employees). On October 15th, we opened applications for our first group of New Recruits, and have already received over 200 applications. If you are interested in a career in policing, I encourage you to visit the Careers section of our website and follow our Recruiting team on Instagram at  @Join_SurreyPS.

I know residents and business owners have questions about any changes they may see during this first deployment. Rest assured, we will be sharing more information next month. As the Surrey RCMP will remain the police of jurisdiction at this time, we do not anticipate that you will notice any significant changes other than a few officers will be wearing SPS uniforms instead of RCMP uniforms.

As busy as we are preparing for deployment, our relationship with the community remains paramount. On September 30th I joined some of our staff and board members at Holland Park to commemorate the first National Day for Truth and Reconciliation. I also recently had the pleasure of meeting with the Semiahmoo Rotary Club to provide an update on the development of SPS.

SPS knows that the community demands and deserves an accountable, transparent police service. We continue to take steps to provide you with more information. We recently launched a new page Policing Transition page on our website to provide factual information on the transition, and we released our first Report to the Community. The Surrey Police Board has also expanded their regular financial reporting to include more data – you can find these reports here: Past Meetings | Surrey Police Board.

Thank you for your continued engagement as we build Surrey’s own police service. 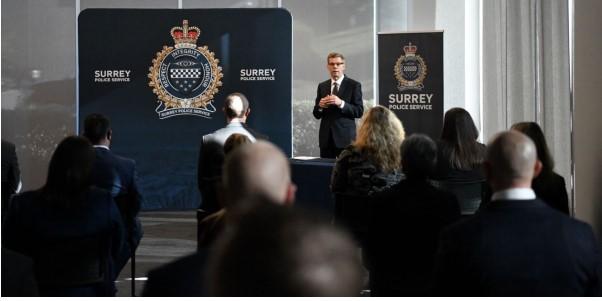 Surrey Police Service (SPS) recently celebrated a major milestone during our second swearing-in ceremony as a Constable was announced as our 100th hire. The swearing-in ceremony also kicked off the start of our first training course for experienced officers as we prepare for our first deployment into police operations this fall.

September 7th was also a significant day as 25 new officers were welcomed to the organization, representing the largest single-day addition of staff for SPS.

SPS has completed two components of our initial three-part community consultation initiative. To date, SPS has done over 100 interviews with community stakeholders, and delivered a public safety survey through Insights West Market Research.

SPS is now organizing focus groups that will be held in late September and into early October. The focus group discussions will be forward-looking and centre on the participants’ views on how SPS can most effectively provide policing services to the community as well as the opportunities for collaboration and partnerships to maximize police and community resources. These discussions are an opportunity for participants to share their lived experience as residents of Surrey and their ideas on how SPS can build sustainable partnerships with the community.

The results of all three parts of the community consultation will help inform SPS’s first strategic plan, which will be developed by the Surrey Police Board and staff this fall. Results of the consultation process will also be shared with the public. 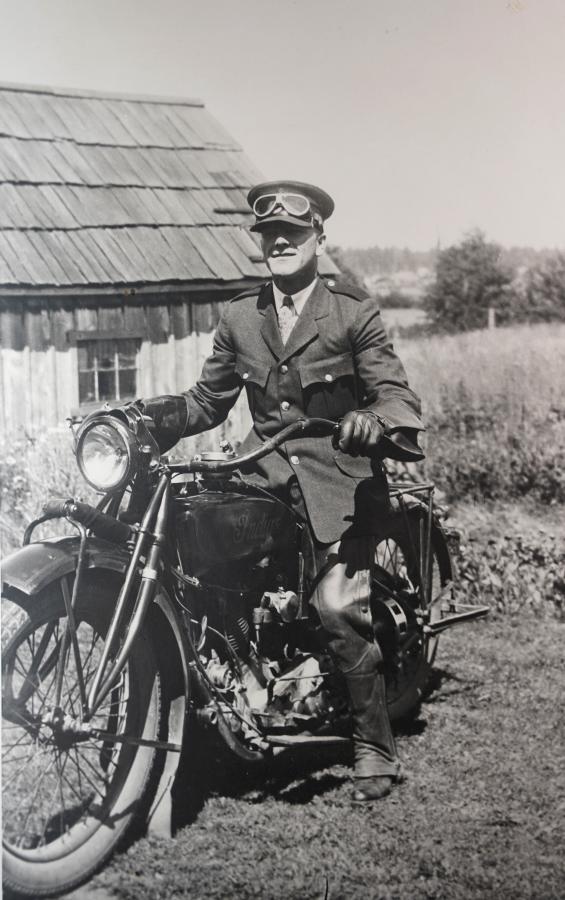 Surrey Police Department, SPS staff and Cst. McDonald’s nephew and his wife came together to honour his memory. On September 9th, SPS dedicated one of its meeting rooms in Cst McDonald’s name. The dedication ceremony included the unveiling of a framed photo and two engraved door plaques. The McDonald Room is one where our employees gather every day to meet and plan for the new Surrey Police Service.

Cst. McDonald is among the honoured at the BC Law Enforcement Memorial and his sacrifice will also be recognized in the Canadian Police and Peace Officers National Memorial in 2022. 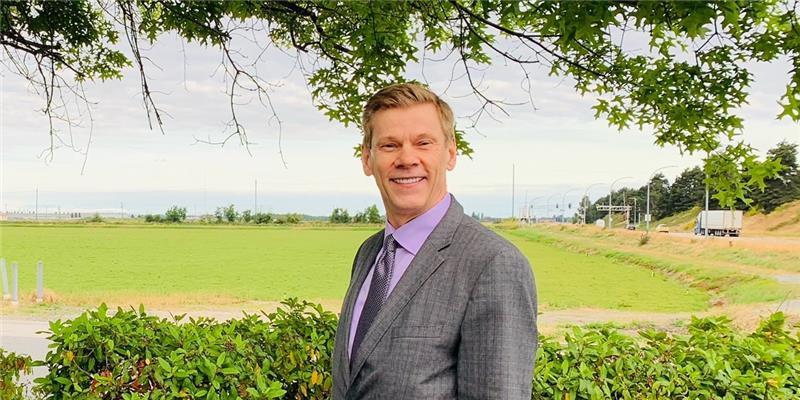 The Surrey Policing Transition Trilateral Committee (SPTTC), which is made up of senior representatives from the three levels of government, has determined an initial deployment date for SPS. The first group of 50 SPS officers will be operationally deployed beginning on, or before, November 30, 2021. As part of the phased, integrated transition process, these first 50 police officers will be assigned to positions within the RCMP Municipal Police Unit in Surrey (i.e. Surrey RCMP). This first group will be followed by subsequent groups of officers as the transition gathers momentum throughout 2022 and 2023.

While there is still work to be done to prepare for this first deployment, there are numerous working groups assigned to meeting this timeline. The SPS will be more than ready to meet the November 30 date. To-date, we have hired over 70 sworn officers, with more coming on board almost every week. In total, SPS has received over 1,100 applications so far. Personal issue equipment is starting to arrive, and our first five-week training course for experienced officers will begin in early September. Our work to deploy our officers is well in hand.

Deputy Chief Constable Mike LeSage works closely with RCMP senior staff in Ottawa on the SPTTC working groups, and they are fully committed to the policing transition and the November 30 deployment date, as are Public Safety Canada, the Province of BC, and the City of Surrey.

The Surrey Police Union and CUPE 402 (representing our civilian staff) are also fundamental to the ongoing build of SPS. I look forward to working closely with the leadership of each union to provide the best in public safety for the citizens of Surrey, and a supportive and healthy working environment for our police officers and civilian employees.

This is an exciting time for SPS and for Surrey as we prepare to deploy our first officers into policing operations. As additional details of the phased transition are confirmed, more information will be shared so you know what to expect when Surrey Police Service officers begin to respond to calls for service in this fall, alongside Surrey RCMP members. 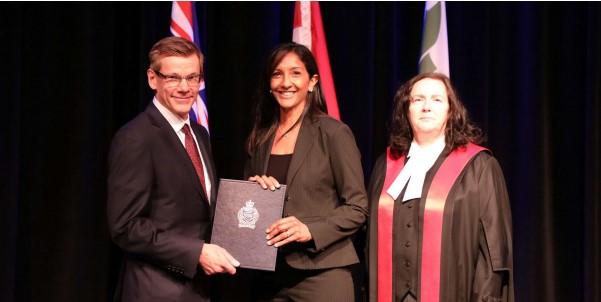 A notable moment from the ceremony included Deputy Chief Constable Michael LeSage ceremoniously taking his oath on a gifted eagle feather, symbolizing a blending of his indigenous culture with the oath of allegiance and office.

The interviews with community stakeholders are well underway with healthy engagement from various interviewees. Many of the interviews have provided further contacts for future focus groups and discussion with the community. A survey was also distributed to over 1,000 recipients using a scientifically sound, random sample.

The outcomes of this consultation process will be shared with the community this fall.

Our Recruiting Unit is actively screening and hiring experienced police officers for SPS’s anticipated deployment in fall 2021 and beyond. To-date, over 75 sworn and civilian employees have been hired.

In June, SPS opened the hiring pool for experienced officers to join as frontline officers and an overwhelming response led to the closure of the posting just four weeks later.

More opportunities to apply as experienced officers and new recruits will be available in the fall. We encourage applicants to check our website regularly for both sworn and civilian job postings www.surreypolice/careers.

Details will be available closer to the dates on the information sessions webpage.

June marks six months that I have been with the Surrey Police Service as the Chief of what will be the newest police service in Canada. Every day, I am acutely aware that this position comes with great responsibility – responsibility to Surrey residents and business owners. You are our partners both in building the Surrey Police Service (SPS), and in its ongoing operations, once SPS is the police of jurisdiction for Surrey.

A cornerstone of SPS will be a community policing model which requires a collaborative approach to public safety. Ongoing communication and consultation with the public is extremely important to SPS. This monthly “SPS Updates” e-newsletter is one of the ways we will be sharing regular updates on the development of SPS, in addition to our Facebook and Twitter, and news announcements.

Last week, we announced the launch of our first community consultation initiative, which will help SPS and the Surrey Police Board establish our initial policing priorities and understand the expectations you have of your new police service. This three-part consultation process will include a public safety survey, stakeholder interviews and focus groups, which will be designed and led by independent research experts. The results will be shared with the community later this year, and we will use the findings to develop SPS’s first strategic plan this fall. This project represents the initial effort of the SPS to engage with the community and is the first of what will be an ongoing dialogue with all community stakeholders.

Following Elections BC’s approval of an application for a petition to conduct a referendum on Surrey policing, I have been asked what impact this will have, if any, on the development of SPS. First, it is important for me to note that the decision on what type of police service a city has (RCMP or municipal), and any debate surrounding that decision, are the responsibility of the city, not the police. From our perspective at SPS, the transition from the RCMP to a municipal police service in Surrey is approved and moving ahead. This police transition was unanimously approved by Surrey City Council in 2018, followed by the approval of the Province of BC in 2020. In addition, the Province has previously indicated it is not interested in holding a referendum on this matter, and the Province will continue to be the final decision maker on calling for a referendum, regardless of the outcome of this petition.

At this time, our mandate to create a modern police service that is tailor-made for Surrey, remains unchanged. The transition to the SPS is progressing well. Every day we move forward with this monumental task. Some days the gains are big; other days it’s a series of small, incremental steps. As we often say around the office, this is a marathon, not a sprint.

Almost every week, our team is joined by new police officers and civilian staff. To date, we have hired more than 70 staff with a wealth of expertise and diverse experiences. As our team grows, so too does our capacity to build an exceptional police service for Surrey. Over the past couple of months, SPS staff have been primarily focused on the recruitment of police officers, policy creation, development of our training program, and procurement of uniforms and personal issue equipment.

I’m looking forward to the community consultation over the summer, and to hearing your ideas for how SPS can best serve the public.