The transition of policing services from the RCMP to Surrey Police Service is well underway. The current phase involves an integrated policing model with both SPS and RCMP officers responding to calls for service. 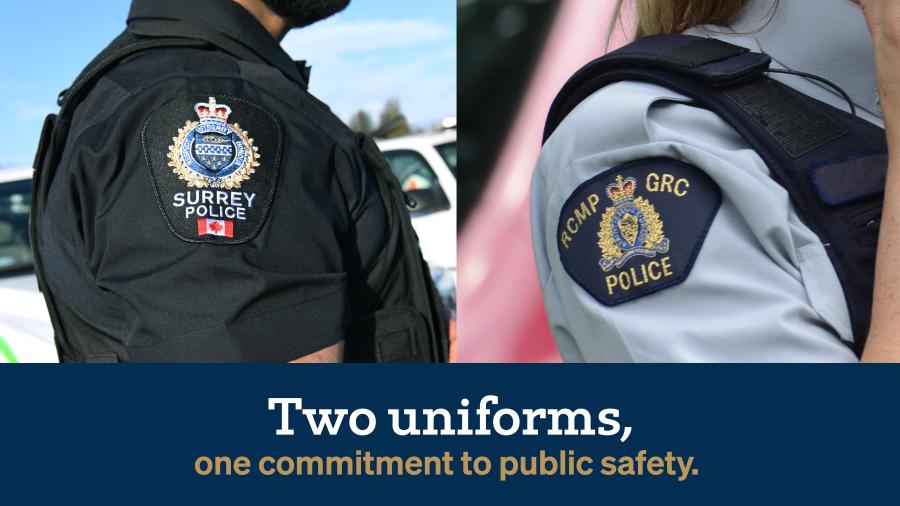 The policing transition is being guided by the Surrey Policing Transition Trilateral Committee, which is made up of senior representatives of the three levels of government. This group has approved a phased, integrated approach to the deployment of Surrey Police Service (SPS) officers to ensure a seamless and safe transition.

The transition officially began in November 2021 when the first group of SPS officers were deployed into policing operations, alongside the Surrey RCMP (news release).

Additional SPS officers are deployed into policing operations every two months, as outlined in the SPS-RCMP Human Resources Strategy and Plan. This plan sets out the deployment and demobilization numbers to May 2023, by which time SPS will have deployed 295 officers, and the Surrey RCMP will have demobilized up to 297 officers.

SPS officers are integrated into the Surrey RCMP detachment every two months, and RCMP officers are gradually demobilized. During this phase, the RCMP remain in command of policing. Surrey residents will see officers in both RCMP and SPS uniforms, however all police contact information remains the same (604-599-0502 or 911).

There will be a change of command from the RCMP to SPS as SPS becomes the police of jurisdiction for Surrey. The timeline for Phase 2 has yet to be determined by the Surrey Policing Transition Trilateral Committee, and will ultimately require approval by the Province of BC.

How do residents report crime in Surrey? Have phone numbers or police station locations changed?

All contact information and locations of police stations remain the same. The non-emergency number for Surrey has not changed: 604-599-0502 (911 for emergencies).

While people will see SPS officers in the community and responding to calls for service, Surrey RCMP continues to be in charge of policing at this time.

Who will show up when residents call police - SPS or RCMP?

When the public calls for police service in Surrey, they may see an officer from the Surrey RCMP or Surrey Police Service (or both) show up to assist them. Surrey RCMP will dispatch the officer that is closest/available to their location.

Will SPS officers be attending calls on their own, or will they be paired up with an RCMP officer?

What jobs/roles are these deployed SPS officers doing within the Surrey RCMP?

The majority of deployed SPS officers are assigned to the Frontline, with others working in positions within community services and investigative services.

Why doesn’t SPS have their own vehicles? When will SPS vehicles be in the community?

For now, SPS officers working alongside the Surrey RCMP will use RCMP-branded police cars. Part of the phased transition is gradually familiarizing Surrey residents with the look of SPS – we are starting with uniforms, and vehicles will be added in the future.

How do I contact an SPS member who dealt with my file?

During this phase of Surrey's policing transition, you may be assisted by a Surrey RCMP or SPS officer. No matter who attended your call, please call Surrey RCMP (604-599-0502) or the number on the business card provided to you, if you need to follow up on your file.

How do I make a complaint about an SPS officer?

If you wish to make a complaint about the service you received, who you contact will depend on which agency served you:

When will SPS take charge of policing in Surrey?

The pace and timeline of the policing transition is determined by the three levels of government via the Surrey Policing Transition Trilateral Committee, not by SPS.

The transition partners are currently negotiating the process and timeline for SPS to assume command of policing in Surrey for Phase 2 of the transition. The Province of BC has final authority on when SPS will become the police of jurisdiction.

What agreements are in place between SPS and the RCMP?